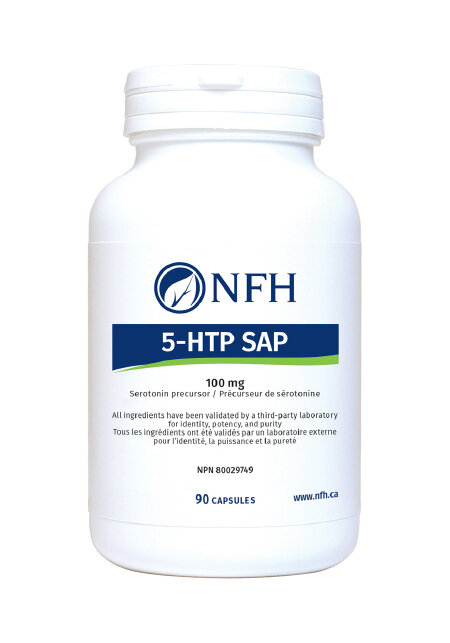 003-30
CAD $32.70
In stock
1
Product Details
Brand: NFH
Mood imbalance is one of the most prevalent concerns affecting an individual’s quality of life. Serotonin or 5-hydroxytryptamine (5-HT) is a monoamine neurotransmitter involved in several crucial physiological processes, especially in modulating mood, cognition, sleep, appetite, learning, memory, and vasoconstriction. Serotonin is synthesized in the intestinal tract as well as in the central nervous system.

Inadequate levels of serotonin in the brain have been associated with several disorders.

5‑Hydroxytryptophan (5‑HTP) derived from the seed of Griffonia simplicifolia is a natural precursor needed for the synthesis of serotonin as well as for the neurohormone melatonin. Orally administered serotonin is not able to cross the blood-brain barrier and therefore cannot enter the CNS. 5‑HTP, however, is able to cross the blood-brain barrier, where it can then be utilized as a precursor to raise serotonin levels safely and effectively.

Save this product for later
Display prices in: CAD